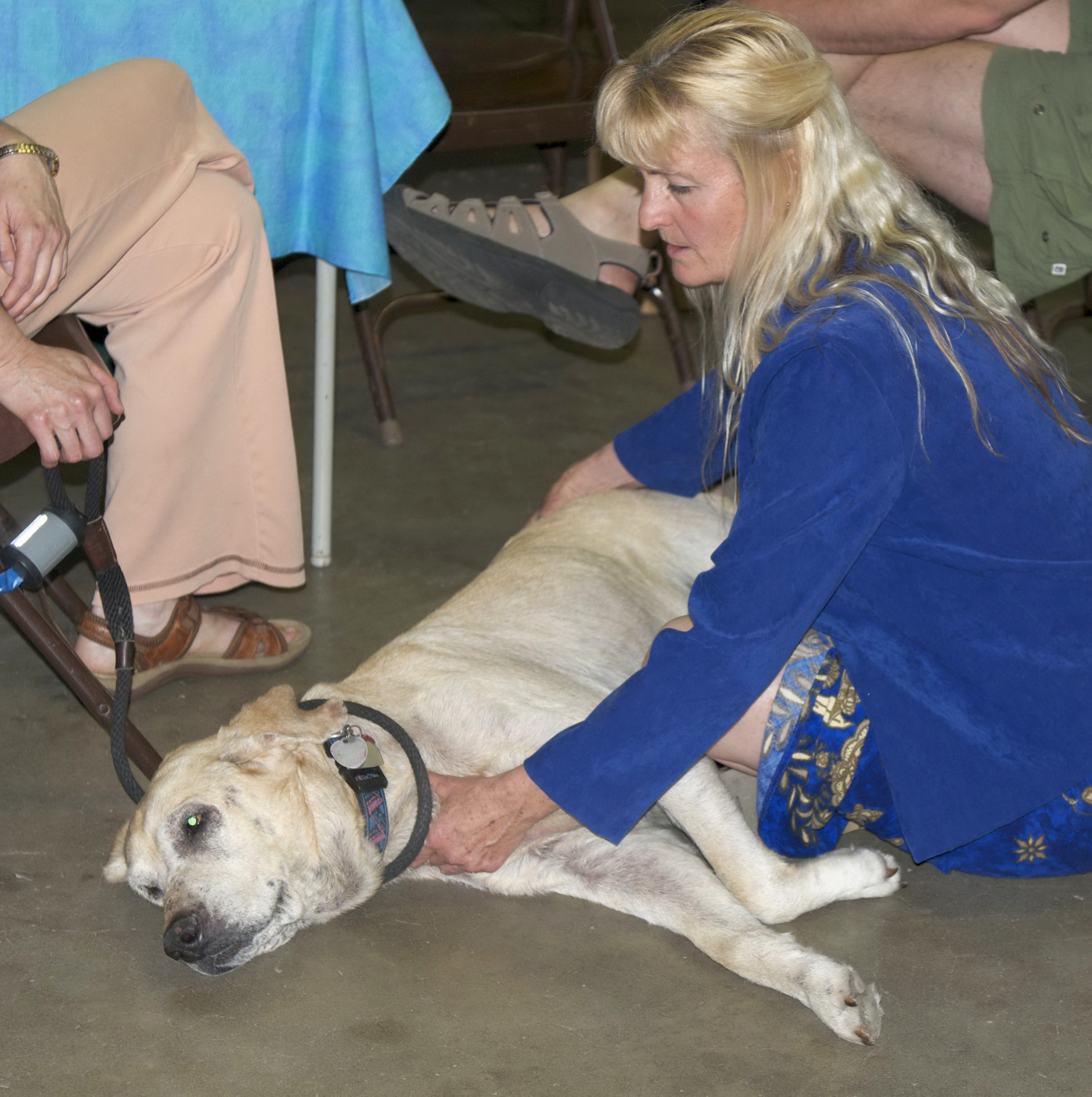 Although this story discusses a dog, the method of animal communication and healing described here is an effective method for facilitating emotional healing and resolving behavior issues for all types of animals: parrots, other birds, dogs, cats, horses and other exotics. When working to heal feather destruction having Healing and Communication work done with your bird is often the only way to address the emotional component of your bird’s feather destruction habits.

As a puppy, Indigo rode in the back seat of the car very well. She either laid down and napped or calmly gazed out the window. As she grew, it became time for her to be spayed. The trip to and from the veterinary office was uneventful. However, after that day Indigo never felt safe in the car again.

Now after climbing into the car she panted noisily, whining and whimpering, while in constant motion – pacing back and forth. Something had occurred that transformed the experience of riding in the car from one of feeling safe and content to one which evoked fear and anxiety. But what was it?

Each individual animal carries memories from both joyful and stressful events. At the core of every aggressive dog who starts a fight or cat who doesn’t use the litter box is a source incident. This is an event that an animal experienced and has formed very specific beliefs about what happened, and why it happened.

Every encounter an animal has teaches him about what to expect from people, places, situations, and things. As an animal learns through these experiences beliefs form. These beliefs become filters that he then begins using to interpret both familiar and new experiences. Animals have the ability to formulate logical and justifiable reasons for their behaviors just like people do.

If an animal was abandoned he may become extremely fearful when riding in a car; if a dog had a bad experience with a delivery person – then all delivery trucks and drivers become bad people in the dog’s eyes. If a cat was severely injured from a dog attack, then all dogs are seen as the attacker. These are examples of possible source incident experiences.

A source incident does not always have to be traumatic. Sometimes if an animal receives the wrong message from what a person has said a misunderstanding can occur. Inappropriate behaviors can also develop from this type of miscommunication.

A source incident carries more than memories and decisions that have been made. It also carries emotions, often very potent ones, reinforced by powerful convictions.

It has been proven that the human mind-body connection responds to the memory of a past event and the thoughts of a future event with the same level of emotional intensity and physiological responses that would accompany an event actually occurring. In my work with the animals, I have observed a similar process taking place. An animal’s mind-body connection also cannot differentiate between a memory, a thought about something going to happen, and the occurrence of the actual event.

When a source incident has been triggered the animal is in the past reliving the experience as if it were actually going on. If the source incident was a traumatic event the animal is faced with the emotional terror and the unshakable belief that he is in a life and death situation. In many cases he may even believe that he is fighting for his very life.

What Triggers a Source Incident?

The underlying cause behind what actually brings the memories and emotions of a source incident rising to the surface will be different for each animal.

Animals are sensory beings – just as we are. Any sensory stimulus, linked to the source incident, can begin the process of bringing the memory and all the associated beliefs and emotions into the present. The trigger stimulus could be a sound, a smell, a taste, a sensation, the way something feels, or a disagreement between two people. Something visual can also trigger a source incident: a person wearing a hat, a truck, a certain color, or a hand motion. The possibilities are virtually endless and are unique to each animal.

When animals are being asked to face past issues they respond in as many different ways as people can. Some recognize the opportunity being given them and eagerly move forward. Others, become emotionally paralyzed by the thought of facing – what for them is – their deepest darkest fear. When this occurs foundational support work must be done first.

Over the years, I have developed specific processes for restoring an animal’s inner strength from the inside out: emotionally, physically, mentally, and spiritually. Initially, I thought these were only visualizations for building and nurturing an animal’s self confidence and self esteem. However, it was soon recognized that these processes touched an animal, and influenced behavior, on a much more profound level than could attributed to building confidence and self worth. Now they are recognized as sacred initiations, for the animals, that truly facilitate them to heal from the inside out.

On a spiritual level these initiations introduce, affirm, and connect each animal to universal divine aspects present within, and existing in, all living beings. Once this truth is remembered a path formerly unrecognized, or even forgotten, begins to glow. This delicate illumination is at the foundation of restoring an animal to health and emotional wellness. As each individual embraces and grows in alignment with the universal truth of his source his healing journey is empowered by having this connection reawakened within.

When an animal feels comfortable with himself there is no need to to try and impress others or demonstrate that he is big and tough through bullying others or acting aggressively. It is simply not an issue. As in people, only an insecure individual has the need to display intimidating behaviors. An insecure animal puts a lot of effort into trying to hide this lack of self confidence by trying to convince others he is stronger and more confident than he actually is.

Fear and Aggression are Related Behaviors

Fear-based and aggressive types of behaviors stem from a central issue. It can be described as a lack of self esteem. However, self esteem does not even begin to touch the depth of what the animal is experiencing. A more accurate description is, a lack of awareness or knowledge of having a connection to something greater than himself . When experiencing this state an animal believes that he is completely alone. This belief is not related to how much he is loved by his family. It has to do with feeling completely isolated. It is an entirely separate issue from being loved and cared for. However, these feelings of emotional isolation can prevent an animal from being able to feel that he is loved.

For many animals this belief of being alone leaves them feeling very fragile and vulnerable. In situations like this, before the source issue can even be mentioned, work must be done to reestablish a connection with the truth of who he is. The healing initiations described above for strengthening an animal’s emotional resolve also produce powerful results in creating a firm foundation for beginning the healing process for fear-based or aggressive behaviors.

The need for remembering, and beginning to embrace, the experience of being one with the universal life force energy lays a stable and nurturing foundation for emotional healing. The seed for this connection must be planted, nurtured, and allowed to grow before we can even begin to address the source incident.

Clients often ask how soon can they expect results? As with any transformational process, each animal can only progress at a pace which best suits his ability to embrace change.

Each animal’s progress is directly linked to three distinct yet related areas. First he must be able to reveal the source incident. In preparation for this sometimes healing work must be done to help restore his inner strength from the inside out.

After the source incident has been identified, the second area influencing the results we can achieve is linked to the pace each animal needs for his personal healing process. Sometimes, layers need to be delicately removed as if peeling off the layers of an onion – one at a time. The pace needed by your critter kid for healing his emotional scars and transforming the related unfulfilling beliefs must be respected and supported.

The third area influencing the results we can achieve is your ability to do as many of the suggestions that we discuss during the conclusion portion of the appointment. You will be introduced to a revolutionary way of speaking to and working with your animal companions. The methods you will be taught are powerful healing tools that can heal emotional wounds, improve behaviors, and enrich the lives of you and your critter kids.

The role you play in helping your critter kids heal through the emotional traumas of the past is an active one. Additionally, your critter kid’s healing process will be strengthened by natural health care methods that will be suggested for your personal situation. When healing inappropriate behaviors supportive measures could include diet, nutritional supplements, herbs, flower essences, massage, color therapy or aromatherapy.

Any behavior, unlike feeling safe and calm, loved and cared for are behaviors that can be approached for healing.

Once the source incident has been revealed, the emotional healing process begins. Awareness and knowledge hold healing virtues and contribute vital aspects towards healing behavior issues at the source.

What was the experience that this young dog had that caused her to become so fearful when riding in the car? It took several healing and communication attempts before Indigo had enough distance from the actual experience and had begun feeling safe enough to share what had happened.

While at the vet, Indigo had observed a cat being sedated for surgery. However, at her young age she was certain that the cat had been killed right before her eyes. Watching a cat struggling to resist the sedation process could appear as if he had died after falling asleep from the sedative. After this information came forward Indigo’s healing process began. As she integrated the healing work from this key session she began recovering from her experience. Indigo’s feelings of being safe and comfortable while riding in the car had been restored.

Schedule a Healing and Communication Session for one of your critter kids. Email us at
info@MoransCritterConnection.com .