Why Feed Your Birds Organic 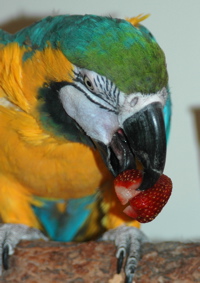 **With the updated information coming out in the Sprouting Book revision, it’s more important than ever, to feed your parrots and finches organic foods.**(Feb. 19, 2019.) Be sure to sign up for our newsletter so you have the latest details on when this book is available.

When grocery shopping for your parrots do you think about the nutritional value of the  fresh fruits and vegetables at the market? Have you wondered about the pesticide residues in the nuts and seeds your bird loves ? Did you know that the bag of raw peanuts you’re looking at, if grown commercially, has a higher potential for absorbing the chemical fertilizers and pesticides used during its growing season because peanuts grow underground?  Commercially produced fruits, vegetables, grains, legumes, nuts and seeds routinely have an overwhelming amount of chemicals used on them and penetrating the soil they are grown in.

There are four primary reasons why people choose to buy organic foods for themselves. These same four reasons apply when it comes to choosing organic foods for your parrots. First, those who buy organic care about maintaining a high level of health and well being. Second,  avoiding produce and foods that contain pesticides and chemicals is an important part of preventive health care. This is significant in preventing the numerous diseases and illnesses directly linked to pesticide use.  Third, organic foods have a higher nutritional content. And fourth, pesticides are known to affect our environment adversely. This effects parrots in our homes, in aviaries, and in the wild.

When distinguishing commercially grown foods from organic produce  strict growing requirements must be met and maintained.  When selecting organic grown foods, be sure to look for the USDA Organic Seal – or another comparable international organic seal.  Foods labeled “no spray”, “pesticide free” or “residue free” are not organically grown. Artificial colorings, flavor enhancers or chemical preservatives are not allowed in any  packaged food labeled USDA Certified Organic.

Commercially grown foods have a huge volume of chemicals used on them  regularly. These include insecticides, that indiscriminately kill all insects – even the beneficial ones, herbicides and soil fumigants that sterilize the ground. 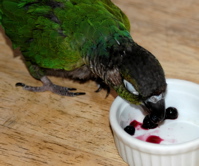 When reviewing the lengthy list of documented illnesses and diseases directly caused by pesticides the primary information source comes from human based case studies. According to the 60 page report, Pesticides and Human Health, published in 2000, these include  cancer, respiratory disease, neurological damage, reproductive and developmental problems, behavior abnormalities and immune system damage.

This type of data does not exist specifically for parrots. The reason being is that avian veterinarians and scientists specializing in this area of research refuse to subject parrots to a scientific study that they know would cause them to develop diseases already documented in humans and  observed in wild bird populations. I applaud this level of integrity being present in the scientific community. The current approach  to document the effects seen in parrots is to feed them a balanced organic diet and note the health improvements seen.

The nutritional value of any organically grown crop far exceeds those produced by conventional farming.  Medical researchers Stephen Davies, MD, and Alan Stewart, MD, in their book Nutritional Medicine, state that ,   “The quality of (conventionally grown) food is so poor that the actual nutrient intake in terms of vitamins and minerals … is inadequate and can produce disease.”

Why is organically grown food  nutritionally superior ? The secret is in the soil.  The nutritional value of a food is directly linked to the fertility of the soil. On an organic farm the soil has been carefully nurtured for years using methods that enhance natural fertility and biodiversity, these include crop rotation, planting nutrient rich cover crops that are turned back into the soil, and using organic animal and plant fertilization and mulches. If  naturally occurring nutrients and micronutrients are not in the soil, the plants can’t absorb them. Organic farmers acknowledge that fertility of the soil directly affects the nutritional quality of the foods grown in it.

Aviculturists  choose to buy and feed organic because they want their birds to be healthy and happy. For many, understanding why organic foods are more expensive can help justify spending more money for them.

In the wild, birds have repeatedly fallen victim to the pesticides in our environment.  It is estimated that of the roughly 672 million wild birds exposed annually to pesticides on US agriculture lands, 10 percent or 67 million are killed. A friend of mine lives near a prime California agriculture area. He told me, “  After they spray the grapes  near my community there is a pile of dead birds at the end of the  field. It’s sickening.”

The Agency for Toxic Substances and Disease Registry (ATSDR) in the US, issued a landmark report in 1997.  “ A growing body of animal and human data suggests that  many environmentally persistent compounds have the potential to disrupt the normal functions of the endocrine system. These chemicals may have a serious impact on reproductive and developmental parameters in wildlife and human populations.”

The endocrine system of a parrot consists of the hypothalamus and  pituitary gland, the gonads, pancreatic islet cells, adrenal glands, thyroid glands,  parathyroid glands, ultimobranchial glands and the endocrine cells of the gut.   This network of  glands  releases hormones into the blood stream influencing countless  bodily functions. These include  growth and development,  reproductive organ  functioning, calcium metabolism, mineral regulation, feather formation,  liver and kidney functioning and the  secretions of other organs. A bird’s metabolism is directly influenced by endocrine system hormones.  Metabolism describes the sum of all chemical processes taking place in the body as they relate to the break down and digestion of food, resulting in growth, cell regeneration,  use of energy, elimination  of wastes and other bodily functions.

Will you ever look  at another piece of food the same way again?  With birds being so sensitive to chemicals they especially benefit from being fed organic foods.   Choosing organic  helps build a healthier ecosystem for all the earth’s inhabitants, especially future generations of people and parrots alike.

Was this article helpful?

Did it provide you useful information?  Do you have any questions about how feeding organic foods can improve your bird’s health and well being? Leave a comment and let us know.

The information in this feature are excerpts from the article, “Why Feed Organic”, written by Leslie Moran, that originally appeared in Parrots magazine, March 2004, issue #74.