You are here:
Health & NutritionTestimonials 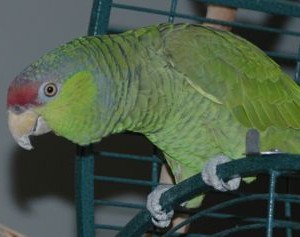 This blog post contains a case study from Leslie’s column, ‘The Holistic Parrot’, 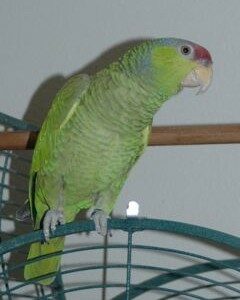 “The relationship with Lily, my Lilac Crowned Amazon, isn’t effortless like with my other parrots. Interacting with her takes a lot of patience, I rarely see improvement and she always seems unhappy.  Her most common activities are sleeping, eating and sitting on top of her cage staring at the wall – this disturbs me.”  When Marilyn contacted me for a personalized consultation with Lily these keys points caught my attention with a snap.

Marilyn continued,  “When she’s not feeling well I get the distinct impression that she’d rather just sit in her cage and be left alone – this just breaks my heart.  When she’s feeling well, she’ll sit facing out more. Or she’ll sit on the cage door. But when she’s facing the wall, that’s one way I can tell that she’s sick.”

“Then, when she goes on the medications I usually see an almost immediate improvement in her demeanor. However, when she’s completed all the doses and her gram stain is clear, I slowly watch her go back to being sullen, scared and grumpy.” Marilyn sighed.  “Then I take in another dropping sample for a gram stain and she’s started on medication all over again.  Her usual diagnosis is either yeast or clostridium. You ask how long has this been going on … it’s been years.” 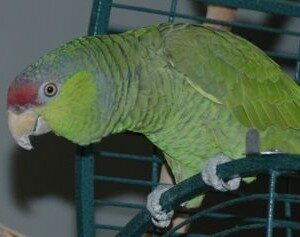 “She also seems to have very poor balance – it’s very difficult for her to stand on my hand or shoulder.”  Marilyn sighed again.  “Our veterinarian can’t find any reason for this.  And Lily is unusually reactive to the movements of my hands.  She’s very fearful of them.  I’ve been working to get her over this for the past five years, but we’re not making much progress.  I have a constant stream of new bird toys in her cage, foot toys and chewables.   She rarely touches them unless it’s a foraging toy and there’s a treat buried inside.”

With Lily I knew right away the course of action we needed to take to get her well and  free her from the endless cycle of infections.  With the illness pattern alternating back and forth between yeast and bacteria, this bird’s immune system needed to be strengthened so she could rise above and stay above the infection threshold of these two organisms.  This would allow Lily to remain healthy instead of being drawn back down into sickness.  A balanced diet providing proper nutrition is the foundation for good health and wellness. 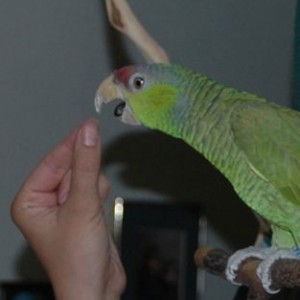 First, Lily was put on a diet tailored specifically to her needs. One that would provide her the finest nutrition possible.  This also meant that specific foods would need to be completely removed from her diet.  These diet changes would help her body build new healthy cells that would strengthen her immune system and support her continued well-being.  Our Wheat-Free sprouting blend made up the foundational food in Lily’s food plan.As a part of her personalized program I formulated an herbal tincture especially for her that would support and restore balance to her immune system..

After about four weeks Marilyn reported that the diet change was going well for Lily and that she didn’t seem as sick as usual.  And the good news was that Lily was growing pinfeathers. “She was growing pin feathers  all over the place”, Marilyn exclaimed. “That’s a good sign!  When Lily’s sick, she doesn’t grow new feathers.”

At eight weeks,  Marilyn reported that Lily’s appetite was fine, activity level was about the same but she was beginning to see indications that her girl was starting to feel better. “Her vocalizations have slightly increased, and she’ more interested in interacting with me. She bows her head for scritches much more often now, and comes to the front of her cage about 60-70 percent of the time when I ask her to. This is great progress for her.”

Marilyn’s news at ten weeks detailed that Lily was still doing well. “In fact, she feels so good she keeps trying to fly. She has also been more vocal and pins her eyes (bird wow!) all the time. I had to work really hard before to make that happen.” 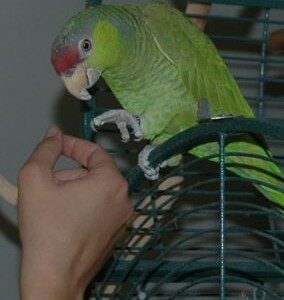 At 12 weeks Marilyn was seeing a mixed response, two steps forward and one step back.  Lily was wanting less physical interaction. However, her balance was beginning to improve. Marilyn reported that Lily hadn’t tripped and fallen in a while.  Another back step noted was that Lily became less cooperative when taking her herbal tincture.  Marilyn commented that Lily was also going through a massive molt.  She felt certain that this was possible because her body was healthy enough to go through with it.

Week 18,  “After the last increase of her herbal tincture she became fatigued and has been sleeping more than she had been during the last couple of weeks.  But otherwise her feathers look fantastic and she’s more vocal than ever. And the other day she just hopped onto my hand without a second thought.  Previously, when she would step up, she had to think about it while weighing her options.”

Week 22,  “She seems to be doing well. She’s been sleeping a little more than usual lately, but that’s all I’ve noticed.  Otherwise she’s still more talkative, which is so nice to see.”

Week 26,   “She seems well. And the great news is – she split some wood this morning from one of her toys!”

Week 33,  Lily continues to do well. I can no longer try to watch TV or movies at all because she won’t shut up.  I haven’t had that problem in years! I don’t mind though, it’s so wonderful that she’s feeling so much better.”

Due to Lily’s  favorable response she was slowly weaned off of the personalized herbal tincture.  Meanwhile,  Marilyn has noticed that Lily has continued to improve. 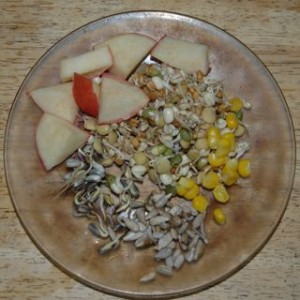 Another parrot whose life was transformed by a properly formulated, properly grown sprouting blend – the foundation of a well balanced diet.

” Lily continues to do great. I suspect simply the diet change was what made the difference in her, so I will certainly continue feeding your sprouts and healthier foods. Thank you so much for your help with that!  I’ll be contacting you soon to order more of your sprouting blends.”

What is Holistic Health Care for Parrots?
March 4, 2019