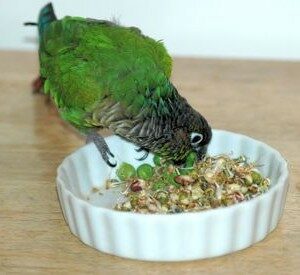 Slip the New In With the Old

One way of introducing sprouts and other new foods, such as fresh fruits and steamed or raw vegetables, is to mix them in with the existing food you’re feeding. Out of curiosity, your bird will being sampling the unfamiliar items, and you can gradually begin to decrease the familiar food as you provide more of the new fare.

Sometimes, this may take a little time—several days, a week or two, or several months. If so, you’ll need to be patient. When I was first teaching my flock to enjoy sprouts my budgerigar, Tweety, took nearly six months to convert, but once he decided to give the sprouts a try, they quickly became a favorite. 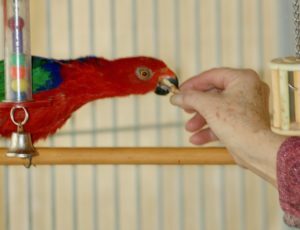 A Star is Born

Another way of creating an interest in new foods is to make them irresistible—by calling attention to them. You are the most important person in your bird’s life, so think how you’d respond if someone you loved and admired was eating an interesting new food, and acting as though it were the most flavorful tidbit they had ever tasted. Wouldn’t you want to give it a try?

Pick up a few sprouts, and begin telling your bird about this tasty delicacy. After you have his attention, pop them in your mouth, and act as if they are the most delicious food you have ever tasted. If your bird is interested, offer him some. The desire stimulated in a bird from this small dramatic display can make him really interested in tasting what you’re eating.

This method can be especially effective if your birds are hand tame and are already accustomed to sharing food with you or receiving food treats from you. If a bird decides a new food is something special, these memories resurface each time the food is offered. 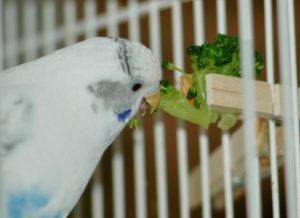 Gail Worth, a professional breeder at Aves International, says, ”You have to treat the birds like children—make sure they eat their broccoli. It’s easier to convert a bird to eating sprouts than people think it is. Often times it’s the people who are concerned about trying something new.” If you fall into this category then the next idea may work well for you.

Before Rainbow and Sunshine, an untamed pair of Crimson-winged parrots, joined my family, they were free-fed a mixture of pellets and seeds. Occasionally they received steamed vegetables and cooked grains and beans. At first I tried mixing sprouts in with their pellets and seeds. They simply picked out what was familiar, and ignored the rest.

I was new to aviculture so I was concerned about completely removing their usual food, and worried about them going hungry if they did not recognize the new choices as being eatable. Then I remembered Gail Worth’s comments, and realized I was being too concerned—too nervous— about introducing new foods. This gave me the confidence to move forward with their diet transitioning process. 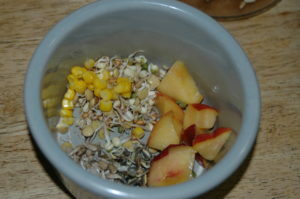 At bedtime, I removed their food bowls and early the next day, in went their dish containing their pellet and seed mix—but only for an hour. After removing the pellet and seed mix, I gave them cooked grains and beans—something familiar that they enjoyed—mixed with sprouts and steamed vegetables. After two to three hours I removed it. At dinnertime, I fed another dish of the cooked grains and legumes mixed with sprouts and steamed vegetables, removing it after two to three hours.

A little bit of hunger, coupled with a bird’s natural foraging instincts, can—through tempting their curiosity—encourage them to sample new foods. After only two or three days, they became more curious about the new foods. Once their familiar fare was only offered once a day, their taste for more wholesome foods increased, and they developed healthier appetites.

Now that you are armed with options for arousing your birds’ interest in new foods, have fun watching them learn to enjoy these healthier food choices.

Please let us know how these ideas work for you, make a comment, ask your questions, let us help you have healthier, happier parrots.